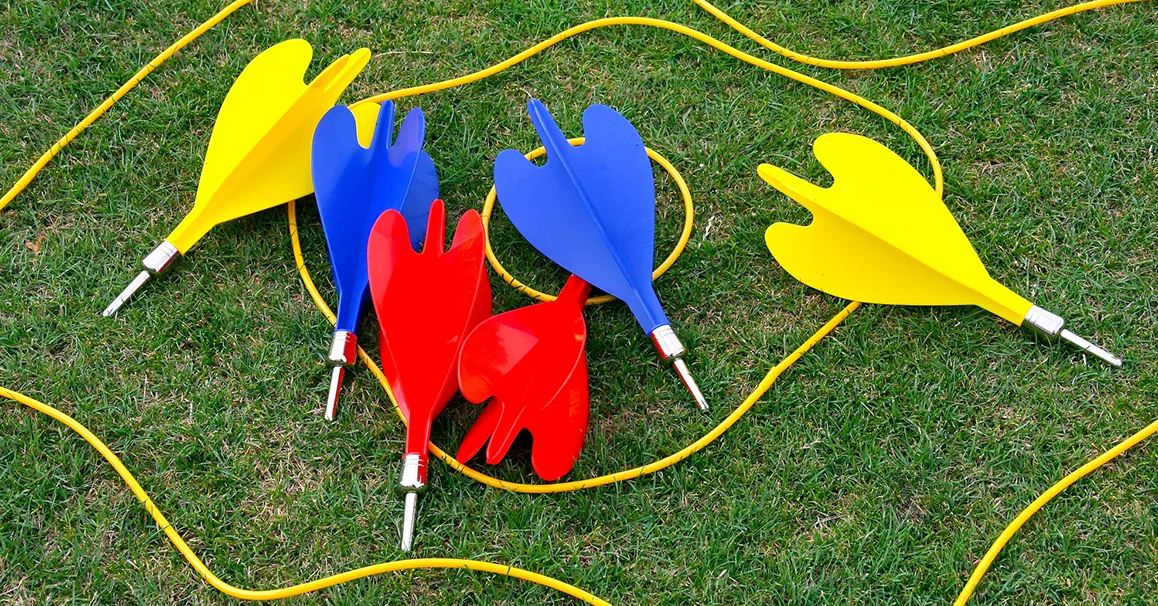 A popular backyard game in the 1970s and 1980s, yard darts (sometimes spelled lawn darts) was a fun way to spend a hot summer afternoon. Like traditional darts, participants competed to determine who could score the most points by tossing game pieces at designated spots.

On the other hand, Yard darts utilize substantially larger targets and darts. There has been debate regarding safety for over 30 years around the sale of commercial lawn darts. Then it’s a good thing that DIY versions are simple to construct and safe to use.

Lawn darts can be played according to traditional regulations, or you can make up your own for a more personalized experience.

What is Yard Darts?

Scores are determined by how close the players’ darts are to the target and how many points they score.

How to Play Yard Darts: The Basics

Yard darts are a terrific game because of their versatility and customizability. Though usually played on a lawn with grass, yard darts can be played on concrete rubber-padded surfaces if the darts are designed for that surface.

Making a Plan of Attack

Yard darts can be played with just hoop targets, a throwing line marker, and some darts. Hoops are a good target because they are usually inexpensive and easy to carry.

Here are some alternatives to the hula hoop if you don’t have one:

The target does not have a predetermined size.

The circle’s diameter is entirely up to you. By enlarging the target area, you may make the darts easier to toss if you’re playing with tiny children.

For players above the age of eighteen, the circle can be reduced to increase the level of difficulty. Players should be able to land their darts in the target area if the circle is far enough away from them.

Making a Line for Throwing

Once the target is in place, draw a line several yards away and begin throwing. This will act as the starting line from which players are not permitted to throw. It can be drawn with a rope, painted on, or otherwise marked to ensure that the players can see it.

Regular lawn darts are huge with a pointed spike that pierces the grass when thrown, like traditional darts. Tossing little javelins near youngsters may cause some parents to have safety worries

Instead of traditional darts, here are a few safer options:

In addition to making darts safer, playing with unconventional darts adds a whole new excitement to the game. If things go awry, you won’t have to worry about participants getting impaled because the darts don’t have pointed tips.

Yard Darts: The Basics and Scoring

It’s time to play yard darts now that your setup is complete and your darts are at the ready. More points are awarded for a successful game.

Two players can both get their darts into the target zone, but neither of them will be awarded any points because the two darts cancel each other out. Only one point will be awarded if neither player’s dart reaches the target area.

Decide how many rounds will be played at the beginning of the game. The end of the game-winner is the player who has the most points.

Recommended: How to Play Tennis In The Backyard

Yard Darts is a lot of fun because of all the different ways you can play with them. You could, for example, play a game of corn hole where you set several goals with varied point values.

Other yard dart game suggestions include:

Invented in the 1950s but only really becoming popular as an outdoor game in the 1970s, yard darts go by several names: jarts, lawn darts, and many others. The concept was to combine darts and horseshoes in one game.

The darts had metal tips with plastic wings to help with aerodynamics so that they could be thrown quickly and accurately towards the team’s target. They were heavy at the front.

Despite their blunt points, the darts were sharp enough to pierce the grass even if they weren’t being thrown directly at someone. Yard darts were originally marketed to adults, not children, by toy manufacturers.

As a result, many families purchased them as a pleasant outdoor activity for their children to play with each other or at targets. There were several incidents in which people were injured, and families filed lawsuits against toy manufacturers and the authorities.

Toys such as conventional yard darts were legally outlawed in 1988. Today’s yard dart sets feature a gentler point, making them better suited for use by children.

Recommended: 7 Best Things To Put Under Your Trampoline

Yard darts may be harmful to families, but the idea of spending time outside together is still a worthwhile one. There are times when it is simple to put a youngster in front of a screen or get lost in the newsfeed on our smartphones or tablet computers

Despite the ease and convenience of technological entertainment, let’s not overlook the joys of the great outdoors. Make some real-life memories rather than those that will be kept on a videogame memory card.

Discover new ways to have fun with others outside by re-creating old games with your ingenuity. As you re-learn how to play in the world before cellphones and streaming television, you will become closer.

Taking the time to play now will allow you to create memories that can be shared with your friends and family, rather than just pixilated images of characters on screens. Lawn darts are on the agenda today!