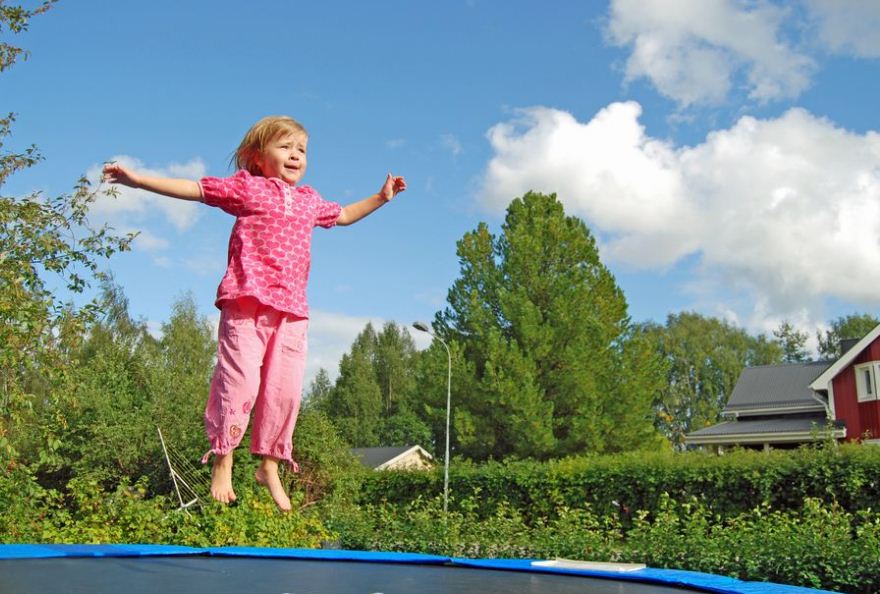 Trampolines and kids go together like butter and toast, yet I was still skeptical about their safety. At 18 months, my second-born son sliced open his forehead on a nearby piano when he was on a tiny trampoline in our home. As a result of this, I’m suspicious of backyard trampolines as well.

However, the Trampoline was a big hit with my kids, who seemed to benefit from the activity. It encouraged them to get outside and enjoy the weather in the winter. Are trampolines so dangerous for young children?

According to the American Academy of Paediatrics, backyard trampolines aren’t safe for kids. Trampolines should only be used by children under the supervision of an adult when they are practicing gymnastics or another sport.

Trampoline-related injuries, such as sprains, strains, fractures, and lacerations, result in more than 100,000 trips to the emergency room each year. Mini trampolines are equally as dangerous for children under six as backyard trampolines.

There are going to be a lot of kids who aren’t happy about this development. Safety standards can alleviate the negatives and allow us to focus on the positive aspects of trampolining.

There are advantages to having a trampoline in your garden. Trampolining, for example, is beneficial to the development of the vestibular system, which governs balance. Because I’m a neuroscience student, I was eager to learn about this.

According to my research, Trampolining is especially excellent for children who have difficulty staying focused in school or who may have symptoms of ADHD. The secret is to begin the day with trampoline exercise and return to academic work for roughly 90 minutes.

Studies are still looking into the link between physical activity and memory and attentiveness.

Jumping on a trampoline is a terrific way to get some exercise.

They also employ trampolines to help astronauts recover bone mass after spending long periods in zero gravity. All kids dream of becoming astronauts at some point in their lives.

So, how can we securely obtain these wonderful advantages? Using a backyard trampoline? The American Academy of Pediatrics recommends that you only allow one person to jump on it at a time.

Use cushions and cushioning as much as possible:

To ensure that the next guideline is adhered to: no flips or somersaults, you’ll need constant adult supervision. That’s a challenging one because when kids can jump so high, that’s often what they want to do.

It all adds up. It’s as if you’re flying when you’re on a trampoline. One of the Trampoline’s mood-enhancing effects is the production of the hormone oxytocin, which is a feel-good hormone.

An adult should always supervise trampoline use because of the inherent desire of every normal kid (and even adults) to perform stunts on the Trampoline.

Recommended: How To Store Hay Bales Outside

We Need Trampolines For Our Future Gymnasts!

Gymnasts Simone Biles and Nina Derwael might be your child’s future gold medalists. You’d do anything for your children’s aspirations, wouldn’t you?

If this is the case, then you must receive formal instruction. Ask your child’s gymnastics instructor if a trampoline in the backyard would benefit their training.

You don’t need to start trampoline training with your child as young as 2 or even 6 years old. There is one way to prevent a backyard trampoline if you’re thinking about the future:

Consider going to a trampoline park to work on your balance and flexibility. Increasingly, families are using trampoline parks as a form of entertainment. Some games contain restrictions, such as no flips, while others don’t.

Recommended: Is It Hard To Put Together A Trampoline?

Taking Advantage of a Trampoline Park

To satisfy your child’s need for a good bounce, you can choose a trampoline park. Trampoline parks are popping up all over cities in unprecedented numbers.

The cushioning over the springs in a trampoline park makes it safer than a backyard trampoline because the trampolines are connected wall to wall.

Whether trampoline parks are safer for children than backyard trampolines were the focus of a recent study, they discovered an increase in trampoline-related accidents in recreational facilities, which they attribute to the proliferation of trampoline parks.

In 2014, the most recent year covered in the survey, trampoline park injuries didn’t even match 10% of trampoline injuries from backyard trampolines, as seen in a nice bar graph associated with their report.

Trampoline parks appear to be a safer option. However, public recreational facilities have cleanliness concerns. There is a negative side to everything.

Your child’s equipment needs may be handled by their team or gym if they are members of such a group. This is arguably the greatest and most secure alternative for your child as far as gymnastic training goes.

They’ll be taught in a safe setting under the supervision of adults who are already in charge of keeping an eye on them. The only drawback is the price. Even though it’s a trampoline, it’s a lot more pricey.

Recommended: How Do You Get Rid of Tree Roots Under Concrete?

The Trampoline should have a few more common-sense rules.

To have a trampoline in your backyard, you must embrace the risk of injury to reap the benefits.

The American Academy of Paediatrics guidelines are sound, but here are a few common-sense tips you may not have previously considered. My husband and I have truly had to be concerned about these things.

We all have those moments when we can’t believe we’re having to tell our kids something like, “Stop eating the silly putty.”

Recommended: Is Trampolining Bad For Your Pelvic Floor?

The End of the Story

It’s important to remember that growing up can be harmful. Curiosity breeds mishaps in children, especially in the formative years.

A youngster can get wounded on stairs, trees, and even on a playground meant for him. Around two-year-olds, coffee tables should have padded corners, and electrical outlets should have rubber covers.

Bubble-wrapping your kids when parenting five rambunctious sons may sound like a good idea. For fun or serious, my husband and I have advised that our young children wear helmets when they stroll about the home.

If your child is only two years old, should you let him or her jump on any trampoline? Ultimately, the decision is yours to make. Depending on your risk tolerance, how much do you plan to invest?

Do you have faith in your capacity to put sensible safety measures to protect your family? At the very least, you now know the advantages and disadvantages before making a selection. All the best!